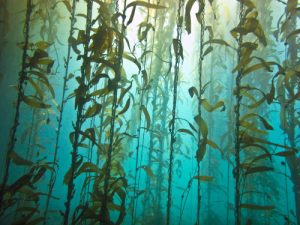 “Important research is taking place in Alaska to better understand the potential for carbon storage in kelp forests and wetlands, and this bill will strengthen our ability to better understand how to safeguard them,” said Sen. Murkowski, who co-chairs the bipartisan Senate Oceans Caucus.

The Blue Carbon for Our Planet Act, S. 3245, which Sen. Murkowski sponsored on Nov. 18 with lead original cosponsor U.S. Sen. Sheldon Whitehouse (D-RI), would establish an interagency working group on coastal blue carbon under the National Science and Technology Council’s Subcommittee on Ocean Science and Technology. The group would be tasked with guiding the bill’s initiatives and would be chaired by the National Oceanic and Atmospheric Administration (NOAA) administrator, according to the text of the bill.

Blue carbon ecosystems — which include mangroves, tidal marshes, seagrasses, and kelp forests — provide a buffer from storm- or wave-driven coastal erosion, improve water quality, and serve as habitat for juvenile fish, according to information provided by Sen. Murkowski’s office. Such ecosystems also remove carbon from the ocean and atmosphere.

“Blue carbon ecosystems have great potential to help mitigate the impacts of climate change in Alaska and elsewhere,” Sen. Murkowski said. “By protecting our shorelines from coastal erosion, storing incredible amounts of carbon, and helping to address ocean acidification, these ecosystems are a significant asset in our efforts to protect the planet.”

If enacted, S. 3245 also would direct the interagency working group to coordinate the development and maintenance of a national map of coastal blue carbon ecosystems and their characteristics; establish restoration priorities for these ecosystems and assess impediments to their restoration; develop a national strategy for studying the effects of climate change and human and environmental stressors on coastal blue carbon sequestration rates; and secure the continuity and use of all related data assets, according to the bill.

Additionally, the group would have to submit a report to Congress summarizing federally funded coastal blue carbon ecosystem research, monitoring, preservation, and restoration activities, while the NOAA administrator would be required to partner with state, local, and tribal governments and coastal stakeholders to develop pilot programs to restore degraded coastal blue carbon ecosystems in geographically, socioeconomically, and ecologically diverse locations, among other provisions.

The Senate bill has been referred for consideration to the U.S. Senate Commerce, Science, and Transportation Committee.