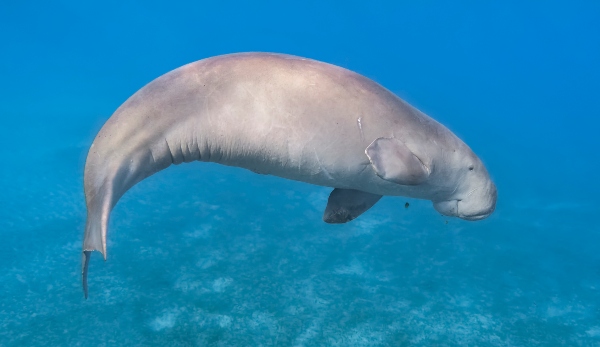 Legend has it that lovelorn sailors, confused by the seagrass fronds floating around the heads of grazing dugongs, mistook these maritime mammals for mysterious mermaids. Now, these myths have developed into more concerted attention from some countries to protect the vulnerable, shy dugong – and the very large number of ecosystems services they provide.

Nicknamed the “sea cow” for its bulk and constant seagrass grazing, the dugong is also known as an “ecological engineer” for its unique contributions to the maintenance of critical ecosystems: thanks to its enormous appetite for highly prized, shallow-water seagrass, the average dugong eats up to 40 kilograms daily, which promotes re-growth of seagrass meadows that capture significant amounts of the carbon dioxide linked with climate change.

The world’s only sea-dwelling herbivore, a dugong can weigh up to 500 kilograms and measure as long as three meters. It can be found in the waters near more than 40 countries, throughout subtropical coastal waters, including Indonesia, Australia, East Africa and parts of the Middle East, including Qatar, Saudi Arabia, Yemen and Bahrain. 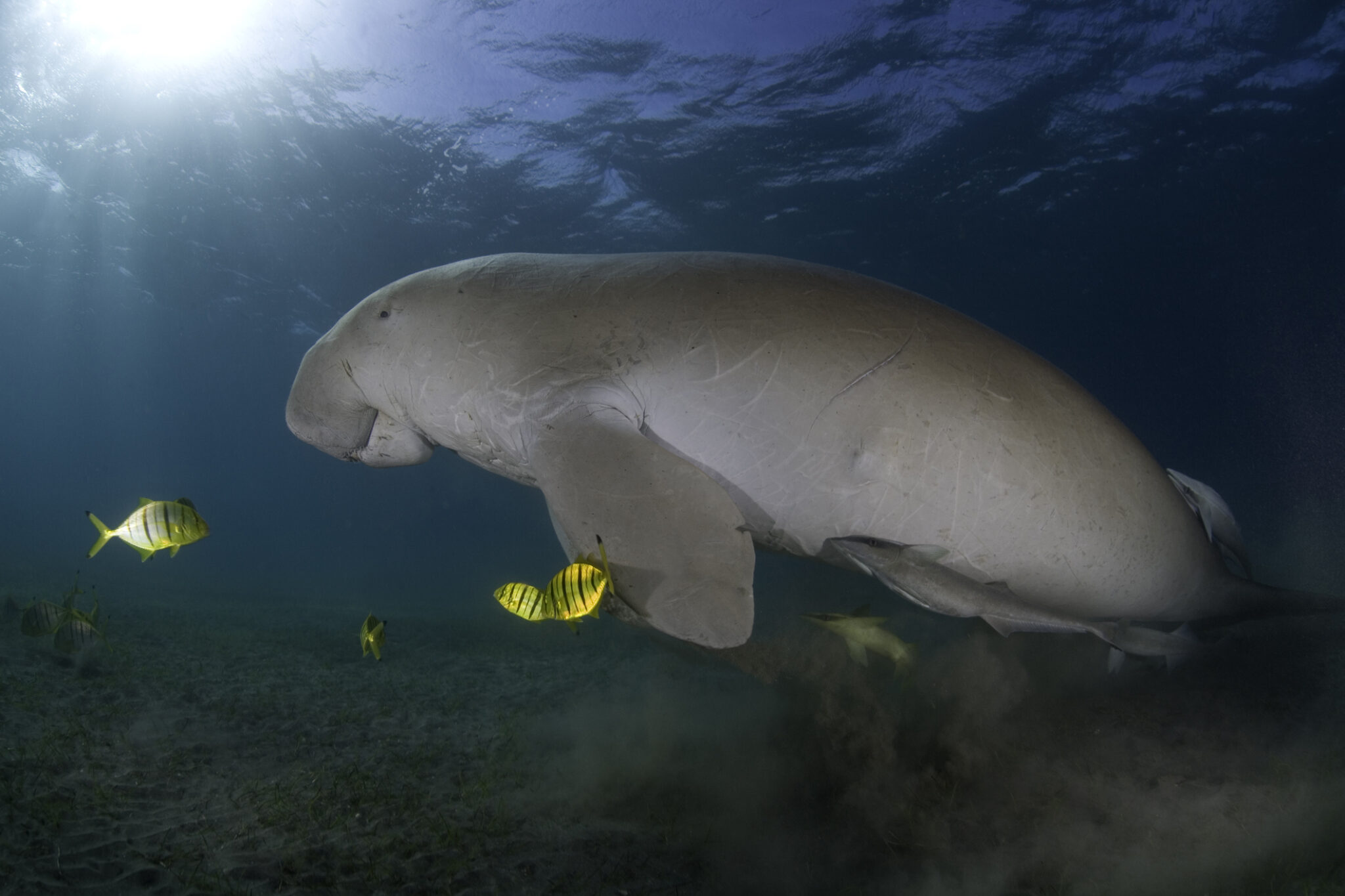 In fact, seagrass meadows can capture carbon from the atmosphere up to 35 times faster than tropical rainforests. These meadows also provide nurseries and food for a diverse range of commercially important fish, says K. Sivakumar, a scientist with the Department of Endangered Species Management at the Wildlife Institute of India (WII).

As a result, by grazing and encouraging regrowth of those meadows for fish stocks, one dugong might be responsible for an annual worth of USD 250,000 in catch for Indian fishers, says Sivakumar. “Someone has to manage these seagrass meadows for the fishes to breed there and make sure the seagrass habitat is in good condition. Only one species is doing this: the dugong,” says Sivakumar.

“So, dugongs are actually contributing hugely to the well-being and the livelihoods of the traditional, small fishers,” he says.

Despite the benefits it provides, the dugong is listed as globally “vulnerable” by the International Union for the Conservation of Nature (IUCN). The dugong has become extinct around China and Taiwan, and, according to the IUCN, anecdotal evidence suggests that the dugong has declined in many other parts of its range. Along the coasts of East Africa and India, the dugong is likely “highly endangered,” with only about 200 individuals remaining, says Sivakumar.

There are a few reasons for the dugong’s endangerment. They are not the most robust: dugongs have slow reproductive cycles, with calves remaining near their mothers for almost two years. Remarkably, for a sea creature, the dugong is a poor swimmer and cannot stay under water for longer than about six minutes, meaning it can quickly drown if stunned or knocked unconscious in a boat collision, or if it falls victim to bycatch and entanglement in fishing nets. Industrial pollution also poses a major threat to seagrass habitats and thus, to the dugong’s survival and well-being.

Nevertheless, many efforts are being made to protect the dugong. It can be a valuable tourist attraction, as visitors are often intrigued by the gentle giants, says Alima Taju, the policy and advocacy coordinator at WWF Mozambique, who has interviewed fishers and local community members about traditional practices concerning the dugong.

As with dolphins, for example, tourists can swim with dugongs in some areas, such as Western Australia, or observe them (from a distance) from boats. (“They are very sensitive; they try to escape if you approach in a boat – in fact, if you see a dugong, it won’t stay close,” says Taju.) In the Vanuatu archipelago in the South Pacific, guidelines have been published for visitors who want to swim or dive with the dugong. Such attention can serve to protect dugongs as it helps to create a measurable value for them. 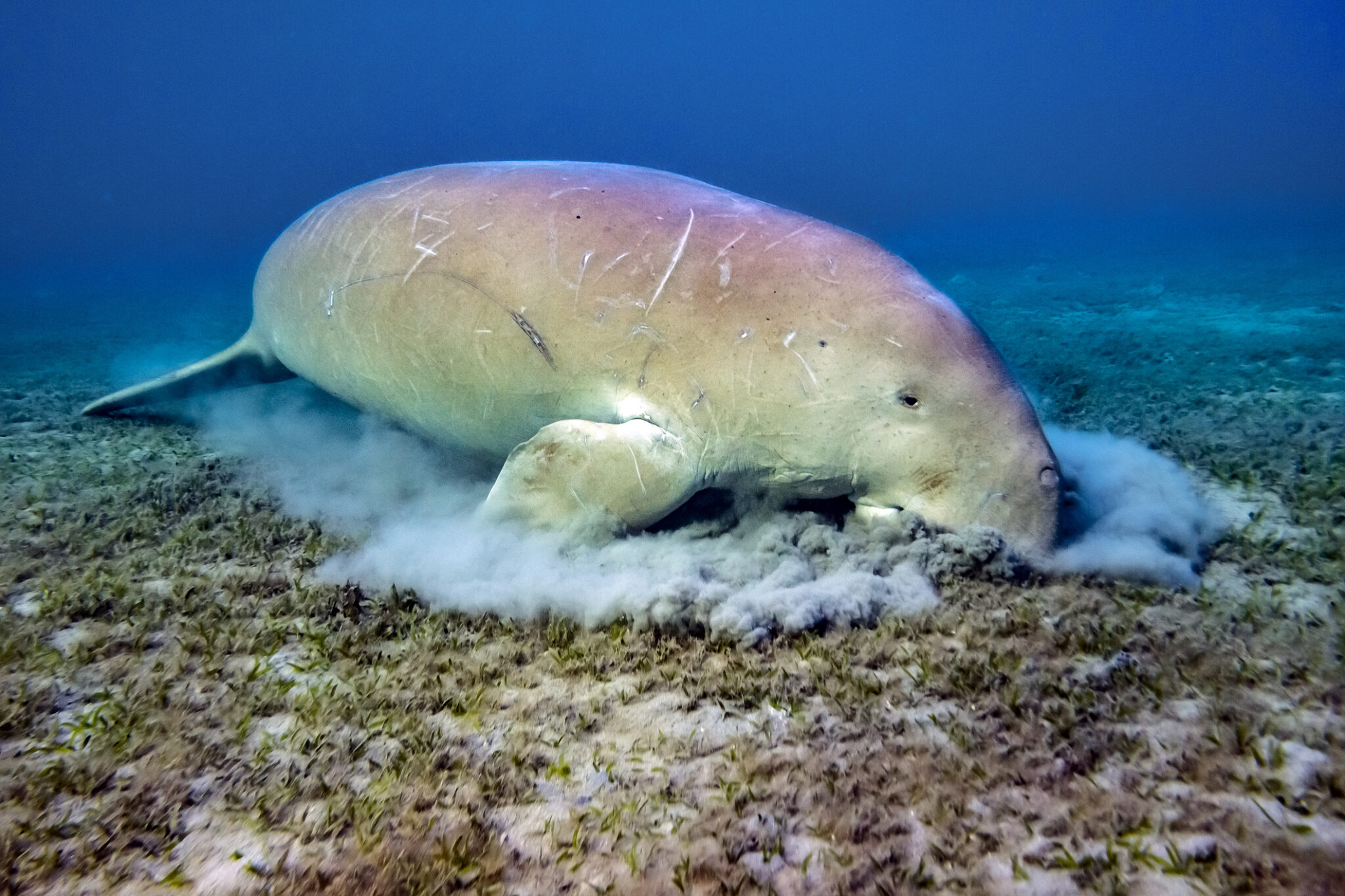 Furthermore, the cultural significance that perpetuates about the creature in some countries also aids their protection, linking the dugong with deities or warning of bad luck to fishers who catch or harm them. Some communities tell stories of dugongs or dolphins that have led lost fishers back to their homes – providing even further reason to protect them, adds Taju.

“Dugongs are very cute, even if they are fat and slow,” he says – so much so that in parts Mozambique, the dugong are sometimes called “sea pigs.” That nickname, given the religious strictures against pork, has sometimes protected them from being captured or kept and eaten if caught by accident.

In India, meanwhile, more efforts are being made to encourage fishers to untangle dugongs from their nets to save them. For example, through India’s Endangered Species Recovery Programme, a scholarship project for schoolchildren is teaching young Dugong Ambassadors why it’s important to rescue trapped dugongs – 14 have been saved so far under this program, says Sivakumar.

Coupled with its prized antiquity, the many ecologically and aesthetic appeals of the dugong are also bringing it into new waters, re-establishing its storied nature in new formats. One of the first features of a new mobile app called Alexander – a digital, storytelling platform launched in late 2020 that meshes audio, writing and film formats – is about the dugong, based on an essay by J.M. Ledgard.

In a fitting tribute to the dugong and indeed, all species, Ledgard traveled in search of the creature that, he said, “touches the world…even to see it or to hear it and consider it with care can help us to understand the loss of other life forms in our world.”

This post was previously published on news.globallandscapesforum.org under a Creative Commons License.

You may also like these posts on The Good Men Project: